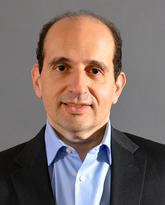 Dr. Oury Monchi is a professor in the departments of Clinical Neurosciences and Radiology, and a member of the Hotchkiss Brain Institute. He is the Research Director of the Movement Disorders Program, Clinical Research Director of the Department of Clinical Neurosciences, and the Tourmaline Oil Chair in Parkinson’s disease. He is also the Canada Research Chair (Tier 1) in Non-motor symptoms of Parkinson's disease.

Until the summer 2014 he was Associate Professor of Radiology at the Université de Montréal and Associate Director for Clinical Research at the CRIUGM. He was also the founding director of the Quebec Parkinson's Network.

Dr. Monchi's lab has been a pioneer in using different neuroimaging techniques to study the origins and evolution of cognitive deficits in Parkinson's disease with the ultimate goal of the early prediction of dementia in the disease. Interactions between cognitive and neuropsychiatric symptoms are also being studied. Non-medication therapies such as transcranial magnetic stimulation and cognitive training are also being explored. Methods used include functional and anatomical MRI, TMS, PET, neuropsychological evaluations, and genotyping.