Dr. John Tyberg, MD, PhD, passed away on April 10 at the age of 83 surrounded by family and friends, including his wife Dr. Naomi Anderson.

Tyberg’s death leaves a huge vacancy within the Libin Cardiovascular Institute and in the lives of the hundreds of people he impacted during his 40-year research career at the University of Calgary.

“I am devastated,” she says. “He was like a second father to me.”

Tyberg was born in Wisconsin and completed his PhD in Physiology and his medical degrees at the University of Minnesota in Minneapolis in 1967 and 1972, respectively.

He completed a postdoctoral research fellowship at Harvard Medical School and worked at the Cedars-Sinai Medical Center in Los Angeles and the Cardiovascular Research Institute at the University of California in San Francisco before being recruited to the University of Calgary in 1981. Hall came to work for him shortly after.

Tyberg’s research lab is one of only a handful in the world that investigate the cardiovascular system according to engineering principles.

Tyberg authored more than 190 publications on various topics, but global influence centred around his work in the areas of pericardial interaction, cardiac pulmonary function and his wave reservoir theory. His goal was always to undertake practical research with a tangible impact on patients.

“I am interested in today’s problems,” said Tyberg in a 2019 interview.

Dr. Carol Kroeker, PhD, an adjunct professor in the Dept. of Physiology and Pharmacology, completed her doctoral and postdoctoral studies in the Tyberg lab. She considers his contributions to the understanding of cardiovascular mechanics to have been “revolutionary.”

In addition to his ground-breaking research, Tyberg was an avid mentor. He trained 29 graduate students over the course of his career. Many of those trainees went on to achieve greatness as physicians, researchers and academics, including the newly appointed dean of medicine for the CSM, Dr. Todd Anderson, MD, who considers Tyberg a friend and early career mentor.

According to Anderson, not only has Tyberg made a lasting impact in cardiovascular medicine, shaping understanding of the physiology of the heart, pericardium and blood vessels and changing the way patients are treated, but also in the lives of those who knew him.

“Professor Tyberg was a consummate scientist, mentor, teacher, collaborator and gentleman,” says Anderson. “He loved his work, his students, his colleagues and particularly his family. He remained active in his lab as an emeritus professor until his final days because he still had things he wished to understand and junior colleagues he wanted to help. He will be greatly missed by all those who had the pleasure of his company.”

Although his students recognize Tyberg’s teaching and research acumen, they also celebrate his unique perspective to problems, approachability and genuine interest in others.

Dr. Nairne Scott-Douglas, MD, PhD, was a young football player with an interest in science when he came to study in the Tyberg lab. Today, he is the Senior Medical Director of the Alberta Health Services Kidney Health Strategic Clinical Network, the Medical Director of the Southern Alberta Renal Program and head of the Division of Nephrology.

Hall agrees, pointing to the lab pictures that fill large sections of the walls in the Tyberg lab. Each photo shows the faces of beaming individuals who are thrilled to be part of the Tyberg lab “family,” some long after their studies were complete.

“John had a brilliant mind, but he was always compassionate,” says Hall. “He always cared about what was happening in your life and with your family. That care and concern extended to all his trainees, friends and colleagues.”

That concern and interest continued far beyond his trainees’ time in the lab. Tyberg stayed in touch with his former trainees all over the world, remaining lifelong friends. He also worked tirelessly to ensure they found their path.

“It didn’t matter what they chose as a career, as long as his trainees got to where they wanted to be, then he felt he had completed his job,” says Hall of Tyberg.

Tyberg was pleased that he had the opportunity to mentor so many over the years.

“I feel a great sense of pride when I think of these people,” he said during a 2019 interview. “It has been a rewarding experience. I consider a great many of [my mentees] as personal friends.”

They also developed an unflagging friendship, meeting weekly as part of a friend group to discuss local, regional and world issues. Those weekly meetings continued over Zoom during the pandemic.

“John has been the quintessential academic: intelligent, rigorous, curious, enthusiastic, well read, a committed teacher and wonderful colleague” says Smith of Tyberg. “We worked together, published scientific articles, reviews and book chapters together and were friends. John was much admired by his students and fellows with whom he developed life-long relationships. Most of all, he was a friend, and I will miss him very much.”

Tyberg leaves behind his wife Naomi, his daughter Anna Tyberg and two grandsons, Jack and Phillip. 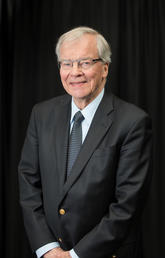 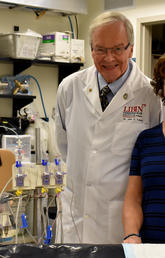