Moving forward in a good way

Respect, dialogue and reciprocity are key to the Werklund School of Education’s decolonization and Indigenization undertakings

The commitment to weave Indigenous perspectives, beliefs and ways of knowing into the Werklund School of Education gained momentum in 2013 with the hiring of several Indigenous academics. In 2015, when the Indigenous Education Task Force was formed, they fittingly selected a sweetgrass braid as a metaphor for how this endeavour could be successfully carried out.

Much like the braid, the fashioning of a welcoming learning environment for all learners could only happen when members of Indigenous communities and allies united in a new partnership based on respect, dialogue and reciprocity. In other words, creating an ethical space was essential if the Werklund School intended to decolonize and Indigenize the academy.

“This new space of learning recognizes the value of long-held Indigenous knowledge traditions and considers how the values inherent in Indigenous ways can help inform, improve and even sustain our contemporary lived and educational experiences,” says Dr. Yvonne Poitras Pratt, BA’02, MA’05, PhD’11, associate professor and director of Indigenous education in the Werklund School.

Creating such a space would not be an easy task as the impact of a colonial history and the residential schools system continues to be felt today. To many members of Indigenous communities throughout Canada, the school system remains a symbol of colonialism, despite discourse around increased diversity in education.

Understanding this history, the Werklund School began by listening to and engaging with Indigenous communities during the 2013-14 Kindling Conversations symposium and discussion series. The latest iteration of this forum continues as a partnership between Indigenous scholars in the Werklund School and the Faculty of Arts, and with financial support from the University of Calgary’s Office of Indigenous Engagement. The first two Ignite sessions explored diverse ideas around decolonizing education and understandings of research impact from the perspectives of eight Indigenous scholars.

In addition to ongoing dialogue, the Werklund School committed to critically examining research and program curriculum to ensure they encompassed Indigenous ways of knowing. One of the most impactful outcomes was the introduction of the Indigenous Education course in the Bachelor of Education program. During the eight-week course, students explore educational policy, practices and legislation relating to Indigenous peoples so that they, in time, can develop relationships, lessons and programs that will support Indigenous perspectives in their teaching.

“Multiple teachers, administrators and other educational leaders have noted the difference that these graduates are already making in the school system,” says Pratt. “Many have been assigned leadership roles because of this critical training.”

Along with preparing culturally competent teachers, the Werklund School is welcoming Indigenous youth to the university. The annual Indigenous Youth Forum brings Grade 9 and 10 students from across Alberta to campus to experience learning in a university context. Organizers furnish challenges that require design thinking, problem-solving and collaboration skills. As well, time at Writing Symbols Lodge (formerly known as the Native Centre) and discussions with Elders provide insight into the significant support available to UCalgary’s Indigenous students.

“We hope that the core takeaway for students is that attending UCalgary is a viable aspiration, and that it is a community where they belong,” explains Anthony Hampshire, BA’74, BEd’77, project relationship specialist in the Werklund School.

Each of these initiatives supports the goal of weaving Indigenous ways of knowing into the Werklund School while also demonstrating the foundational need for reciprocity. “From an Indigenous perspective, reciprocity is viewed as central to a healthy relationship. This principle reflects the notion of a mutual exchange but, importantly, this exchange is viewed as the basis for an ongoing relationship,” explains Pratt.

If Indigenizing the academy can be regarded as a braid, then it is a braid without end; a partnership that must endure as further work remains to be accomplished. 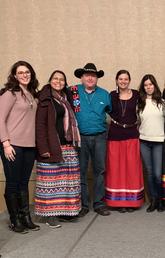 'Nothing about us without us' 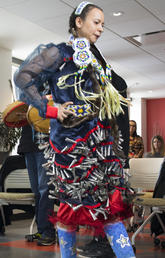