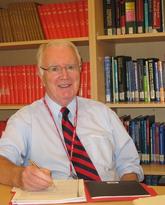 Dr. Lowry obtained his medical degree from the Queen’s University of Belfast in 1956. He subsequently obtained two thesis degrees from that university, M.D. with a thesis on the Genetics of cleft lip and palate in the British Columbia Indians and a D.Sc. on Epidemiological studies of congenital malformations. He obtained certification and fellowship (FRCPC) of the Royal College of Physicians and Surgeons of Canada in pediatrics and medical genetics (1963 & 1993).

He joined Dr. James R. Miller in the Division of Medical Genetics at the University of British Columbia in 1964. Dr. Lowry developed the clinical genetics program at the University of British Columbia and the Vancouver General Hospital (1967-77) and provided medical consultation to the BC Health Status Registry formerly known as the Registry for Handicapped Children and Adults.

In 1977 he established the Medical Genetics Program in Calgary and was Professor and Head of Medical Genetics at the University of Calgary and the Alberta Children’s Hospital retiring from the University in 1998. He had a major role in the development of the Alberta Hereditary Disease Program (AHDP) and was the first person to establish outreach genetic counselling clinics in Alberta having done the same in British Columbia. He has been the medical director of the Alberta Congenital Anomalies Surveillance System which is part of Alberta Health & Wellness Surveillance Branch since 1982.

Dr. Lowry has had an active research career in clinical genetics and epidemiology of congenital anomalies holding Canada National Health Grants and/or Medical Research Council of Canada grants from 1966 to 1976. Subsequent research grants were also awarded by the Vancouver Foundation, BC Provincial Health Department, Medical Services Alberta, and National Health Research Development Program Fund 1986-92 as well as a portion of a recent CIHR group grant for a study of the prevalence of neural tube defects following folic acid fortification (2002-2005).

Dr. Lowry has given a number of invited addresses as guest orator as well as serving on the board and later president of the Canadian College of Medical Geneticists and receiving the Founders Award from that same College. In 2005 he was awarded Physician of the Century Award by the Alberta Medical Association and the College of Physicians and Surgeons of Alberta to honour the top 100 physicians of the century. In the same year he received the Alberta Government’s Centennial Medal and in 2007 a Life Time Achievement Award from the Calgary Health Region. In 2012 he received the Distinguished Service Award from the International Clearinghouse for Birth Defects Surveillance & Research and an award from the Public Health Agency of Canada for longstanding contribution toward improving congenital anomalies surveillance in Canada.

He has published more than 120 articles in peer reviewed journals as well as having many published abstracts or presentations at scientific meetings.