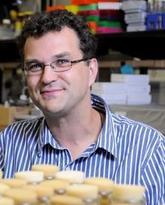 My lab studies organ development in the fruit fly (Drosophila melanogaster) as a model system for how patterns of cell division, cell death and differentiation are established and maintained in development. There are two main areas of research:

The first asks how cell-cell interactions control patterning and growth in limb development. Local (short-range) cell interactions establish the location of organizers in the developing limb. Organizers are groups of cells that secrete morphogens, which form concentration gradients across the limb primordia and coordinate the global pattern of development in the limb. Embryonic limb cells respond to the local concentration of a morphogen to execute different genetic programs controlling growth and differentiation. We are characterizing the genetic and biochemical pathways mediating the cell interactions that control the proper location and action of organizers in developing limbs. The signaling pathways controlling limb development in the fly are evolutionarily conserved and have critical function in the development of many tissues in vertebrates and mutations in these pathways are associated with many human malignancies and inherited diseases.

The second area of research is to study the role of transcription factors in heart development. Many genes known to cause human congenital heart diseases, the most prevalent congenital anomalies, were first identified because of their role controlling the specification and differentiation of cardiac mesoderm in fly heart development. The lab is studying how the conserved Tbx20 transcription factors act in fly heart development and cardiac gene regulation with the goal of identifying novel genes and genetic interactions that may also influence vertebrate development and human disease.