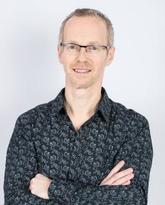 Protein phosphatases of Arabidopsis thaliana and human cells
Protein phosphorylation is a dynamic process that regulates almost every aspect of cell biology. The protein kinases and phosphatases, which add and remove phosphate respectively, represent 2-4% of the protein encoding genes of eukaryotes. My research focuses on the protein phosphatases of humans and the model higher plant Arabidopsis thaliana using a combination of biochemistry, molecular biology and bioinformatics. Major projects include the characterization of plant protein phosphatase one (PP1) regulatory subunits, human nuclear PP1 binding proteins and novel chloroplast protein phosphatases. PP1 is enriched in the nucleus of cells, yet very few roles for this enzyme are known in this compartment. Utilizing affinity chromatography of HeLa cell nuclear extracts on microcystin-Sepharose and SILAC mass spectrometry (in collaboration with L. Trinkle-Mulcahy) we have found numerous new PP1 targeting subunits and complexes. Genomics and bioinformatics has revealed a host of novel chloroplast localized protein phosphatases and we are defining the biochemistry and role of several of these enzymes.

My group is also funded by the Alberta Ingenuity Carbohydrate Research Group (AICCS) to explore the role of the chloroplast localized dual-specificity phosphatase SEX4. SEX4 was previously identified in a screen for plant starch excess mutants and has now been found to bind to and dephosphorylate starch. We are currently characterizing the unique redox regulation of the enzyme in response to the light-dark transition.

We are also interested in the interaction and regulation of carbon and nitrogen metabolism in Arabidopsis and we are currently defining the role of the chloroplast-localized protein PII. PII was discovered in bacteria as a key regulator of responses to changes in carbon and nitrogen availability and metabolism. We have determined that plant PII allosterically senses the amino acid carbon skeleton 2-oxoglutarate and the adenylates ADP and ATP. The primary interaction target of plant PII is the enzyme N-acetylglutamate kinase (NAGK) that catalyzes the rate-limiting step in arginine biosynthesis. The docking of PII to NAGK relieves the inhibition that the down stream product arginine has on NAGK. We are currently exploring the possibility that additional protein targets are regulated by PII in the chloroplast.