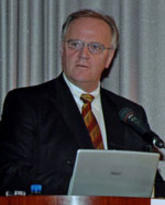 Member of the Alberta Bone and Joint Health Institute

Identification of an Autoantigen (GW182)
in a Novel Cytoplasmic Compartment (GW Bodies)
We identified a novel cellular structure that contains a unique autoimmune antigen and multiple messenger RNAs. This complex was discovered using an autoimmune serum from a patient with motor and sensory neuropathy and contains a protein of 182 kDa. The gene and cDNA encoding the protein indicated an open reading frame with glycine-tryptophan (GW) repeats and a single RNA recognition motif (RRM). The index patient's serum stained discrete cytoplasmic speckles designated as GW bodies (GWBs) that do no overlap with the Golgi complex, endosomes, lysosomes or peroxisomes. The mRNAs associated with GW182 represent a clustered set of transcripts that are presumed to reside within the GW complexes. In collaboration with Dr. Edward K.L. Chan at the University of Florida, we are continuing studies to explore the hypothesis that the GW ribonucleoprotein complex is involved in the post-transcriptional regulation of gene expression by sequestering a specific subset of gene transcripts involved in cell growth and homeostasis.

In the figure above, HeLa cells are stained with the index human antibody (green) and the nuclei counterstained with DAPI (blue). GWBs are cytoplasmic structures that vary in number and size from cell to cell.

The clinical features of patients with anti-GW182 antibodies have been described and the B cell anti-GW182 response and epitopes defined.

The most common clinical diagnosis of patients with anti-GW182 antibodies was Sjögren's syndrome (SjS) followed by mixed motor/sensory neuropathy, and systemiclupus erythematosus (SLE). Of interest, 9/18 (50%) and 3/18 (17%) of the sera that react with GWBs had autoantibodies to the 52 kDa and 60 kDa SS-A/Ro autoantigen respectively. Epitopes bound by the human autoantibodies were mapped to the GW-rich mid-part of the protein, the non-GW rich region, and the C-terminus of GW182 protein. None of the GW182 epitopes had significant sequence similarities to other known proteins. GW182 represents a new category of ribonucleoprotein autoantigens.
Eystathioy T, Chan EKL, Takeuchi K, Mahler M, Luft LM, Zochodne DW, Fritzler MJ. Clinical and seriological associations of autoantibodies to GW bodies and a novel cytoplasmic autoantigen GW182. J Mol Med 81: 811-811, 2003. Monoclonal antibodies to GW182 have been generated and characterized.

To enable a more detailed study of GW182 and GWBs in cells and tissues, including their role in mRNA processing, we developed four monoclonal antibodies (MAbs) that bind the human recombinant GW182 protein. These MAbs can be used for Western blot analysis and indirect immunofluorescence (IIF) on cultured cells and tissues. Of special interest, one of the MAbs, 2D6, can be used to identify GW182 and GWBs in formalinfixed and paraffin embedded tissues after employing an antigen retrieval method (ARM). All the MAbs described in this study immunoprecipitate the GW182 protein. Epitope mapping using overlapping 15-mer peptides representing the full length GW182 showed that the major antibody binding domains of these MAbs are distinct. These MAbs are valuable tools for cell biologists and pathologists to study the location and function of the novel GW182 protein in tissue culture cells, as well as cryopreserved or archived tissues.

The GW182 protein co-localizes with mRNA degradation associated proteins hDcp1 and hLSm4 in cytoplasmic GW bodies.
The function of GWBs was not known, however more recent evidence suggested similarities between GWBs and cytoplasmic structures that contain hLSm proteins and hDcp1, the human homologue to a yeast decapping enzyme subunit. We used antibodies to hLSm4 and hDcp to show that both of these markers of an mRNA degradation pathway co-localize to the same structures as GW182. Control immunoblotting and/or immunoprecipitation experiments showed that anti-L-Sm4, anti-GW182 and anti-hDcp1 sera bound to their respective antigens, but did not cross-react with one another. Thus, our studies demonstrate that GW182, hLSm4 an hDcp1 are found in the same cytoplasmic structures and suggest that GW182 is involved in the same mRNA processing pathway as hLSm4 and hDcp1.