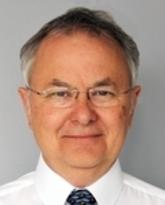 Ralf Paschke spent 4 years as a Heisenberg Professor in a molecular laboratory in the Institute of Interdisciplinary Research at the Universite Libre in Brussels, Belgium working on the molecular etiology of hot thyroid nodules and the mechanism of activation of the TSHR. He was appointed Professor of Internal Medicine and Endocrinology at the University of Leipzig in 1995. His major research interests include thyroid cancer, thyroid nodules, thyroid nodule molecular fine needle cytology (FNAC) diagnostics, the TSH-receptor and diseases caused by TSH-receptor mutations. He trained in Pathology, Internal Medicine and Endocrinology in the university hospitals of Frankfurt, Mannheim and Muenster. He served for 9 years as Director of the Medical Department III at Leipzig University with the sections Endocrinology, Diabetes and Nephrology. He was also the coordinator for endocrine research and deputy chairman of the Interdisciplinary Centre for Clinical Research at the University of Leipzig, Germany. He is the author of more than 350 original journal articles, co-author of several thyroid guidelines and serves on the editorial boards of several journals including Thyroid, European Thyroid Journal and repeatedly the JCEM.

As 85 % of thyroid nodule ultrasound reports in Calgary did not allow to stratify the respective thyroid nodule for its malignancy risk (Symonds et al, Endocrine, 2018) he implemented a stratified thyroid nodule ultrasound malignancy risk assessment in Calgary 9/2017 together with Paula Seal (EFW Radiology) and Chris Symonds (Endocrinology). The malignancy risks for Bethesda thyroid nodule FNA cytology categories in Calgary were presented at the ATA meeting October 2017 by Sana Ghaznavi. A lobectomy proposal for patients with thyroid nodules or thyroid cancer was implemented 4/2017 and revised 10/2017 with the thyroid surgeons in Calgary. It led to 20% lobectomies for thyroid cancer since 4/2017. Together with the Calgary Primary Care Networks (PCNs) Ralf Paschke implemented a thyroid nodule pathway 3/2018. The prospective evaluation of molecular FNA diagnostics for indeterminate thyroid nodules with the Calgary ThyroSPEC™ panel covering 117 point mutations and 23 rearrangements invented by him and Markus Eszlinger led to its implementation by Alberta Public Laboratories and Alberta Health Services 10/2019. ThyroSPEC™ is a reimbursed routine molecular test for indeterminate thyroid nodule FNA cytologies to replace 600 diagnostic lobectomies per year in Alberta and potentially 3500 diagnostic lobectomies in Canada. Paul Stewardson, a PhD student in the PaschkeEszlinger lab, is working on the evaluation and further improvement of the ThyroSPEC™ assay.

Recently he led the discovery of additional EZH1 mutations in hot nodules with TSHR mutations (Calebiro et al., JCI, 2016). Joining forces with Jukka Kero and with the very experienced transgenic facility in Turku led by Matti Poutanen, he recently published a mouse model of non-autoimmune hyperthyroidism with the first description of papillary thyroid cancers most likely induced by increased TSHR signaling (Jaeschke et al., Thyroid, 2018). Alexandra Stephenson, a student of Ralf Paschke, is investigating the roles and involvement of the TSHR and its downstream pathways in hot thyroid carcinoma and nonautoimmune hyperthyroidism.

During the years 2015 – 2019 Ralf Paschke saw 40% of the patients with a new diagnosis of thyroid cancer in Calgary. Based on his previous experience as a local PI for the Lenvatinib and Sorafenib phase 3 studies and the Astra study investigating Selumetinib for the adjuvant radioiodine treatment of patients with high recurrence risk thyroid cancers he continued to focus his clinical work on the treatment of radioiodine resistant metastatic thyroid cancer. He is the local PI for the early access and special access programs for RET and NTRK inhibitors and 2 further current thyroid cancer tyrosine kinase inhibitor studies in Calgary. After the successful resensitization treatment of the first patient in Calgary, five further patients have recently been treated for RAI resensitization in Calgary. With the help of Markus Eszlinger and Sorana Morrissy whole exome sequencing (WES) analysis with mutational phylogenetic tree analysis of their primary tumours was used to predict success or failure of this approach and to identify targets for the off-label use of other tyrosine kinase inhibitors. In addition to the known driver mutations in BRAF and RAS, previously described EIF1AX and AKT1 mutations and also new alterations in oncogenic pathways, for example in the cell cycle pathway (E2F1 and CDK6 mutations) which could be targeted for example by mTOR inhibitors (EIF1AX, AKT1) or CDK inhibitors like Palbociclib (CDK6) were identified. These results will allow to better stratify for newer and individually targeted drugs in case of radioiodine resensitization failure with Selumetinib, Vemurafenib, Tramatenib, or Dabrafenib.