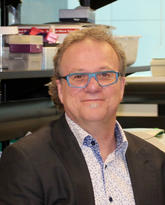 The research in my laboratory focuses on how extracellular signals are transmitted to the nucleus to control such biological processes as growth and differentiation of eukaryotic cells. An elaborate circuitry of biochemical reactions mediates the proliferation and differentiation of mammalian cells. We have gained access to this circuitry through the study of genes implicated in the genesis of human cancer: ?proto-oncogenes?, which suffer genetic damage in cancer cells leading to an unwanted gain of function. Proto-oncogenes serve as accelerators leading the cell into relentless cell division. Many of the proteins encoded by proto-oncogenes serve as relays in the biochemical pathways that transmit signals from the surface of the cell to the nucleus. Several of the genes encode protein kinases that phosphorylate proteins on tyrosine residues. The understanding of how these molecules participate in various signal transduction pathways to control such biological processes as cellular proliferation and differentiation are essential for us to fully understand the biochemical maladies of cancer.

The specific research aims in my laboratory include:

1. To determine the role of the Src-family protein tyrosine kinases during the differentiation and activation of hematopoietic cells. To this end we are identifying upstream and downstream components of the Src signalling pathways.

2. To determine how compartmentalized signalling within the cell influences phenotypic outcomes of particular extracellular signals. We have previously shown that Src family kinases and other signalling molecules are localized on caveolae: what is the function of this enigmatic organelle?

Membrane microdomains such as caveolae are sites of signal transduction. Many cell types including fibroblasts and endothelial cells contain small flask shaped invaginations of the plasma membrane such as the ones shown in the electron micrograph. These structures are enriched in various signaling molecules including cell surface receptors that are attached by a lipid anchor as shown for the neuronal guidance molecule, Ephrin-A5 (immunofluorescence).