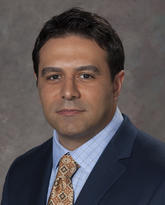 Dr. Girgis is a neurosurgeon subspecializing in deep brain stimulation, epilepsy, complex facial pain, brain tumors, and peripheral nerve surgery. As a functional neurosurgeon, he has extensive experience and expertise in neuromodulation, brain mapping, and awake brain surgery. Additionally, he teaches at the University of Calgary medical school as well as in the residency training programs.

Dr. Girgis trained at several institutions throughout Canada and the United States. After completing a bachelor’s degree in pharmacy at the University of Toronto, he practiced part-time as a pharmacist while completing medical school at the University of Calgary. He stayed in Calgary for his neurosurgical residency, during which he also traveled to Boston to complete a 2-year post-doctoral research fellowship at Harvard Medical School and a master’s degree in education at the Harvard Graduate School of Education. Following residency, he obtained his board certification and then completed a clinical fellowship in functional neurosurgery at Case Western Reserve University in Cleveland. He then moved to California and practiced for several years at the University of California Davis, during which time he also completed another master’s degree in clinical-translational medicine. He recently joined the University of Calgary to continue his practice and research as a functional neurosurgeon-scientist.

Dr. Girgis’ research interests lie in human intracranial cognitive neurophysiology. Using electrophysiological recordings from the brain, he studies social decision-making and higher-order human psychological constructs such as theory of mind and meditation practices. This has implications for the treatment of various psychiatric and psychological disorders using neuromodulation techniques such as deep brain stimulation. He is widely published, and serves as a reviewer for several neurosurgical journals.