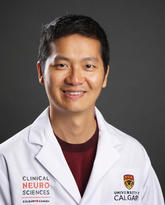 Dr. Nguyen received his doctoral degree from the Department of Neurology and Neurosurgery at McGill University with Dr. Jean-Pierre Julien.  As a post-doctoral fellow, he attended Harvard Medical School in Boston, where he trained under Dr. Li-Huei Tsai. In September 2005, Dr. Nguyen joined the University of Calgary and the Hotchkiss Brain Institute (HBI) as the Investigator of the Brenda Strafford Foundation Chair in Alzheimer’s Research. He started his independent research career at the University with a major Canadian Institutes of Health Research grant, an ALS USA / Canada starter grant, and an Establishment grant from the Alberta Heritage Foundation for Medical Research.

The main goal of Dr. Nguyen’s research is to understand neurodevelopmental and neurodegenerative disorders caused by the disruption of the cytoskeleton and altered cell signaling. The cytoskeleton has a central role in building and maintaining the integrity of neurons. A destabilization of the cytoskeleton in early life triggers lissencephaly and schizophrenia. In adults, its alteration promotes Parkinson’s, Alzheimer’s, and Amyotrophic Lateral Sclerosis (ALS). Supported by many funding agencies, Dr. Nguyen will develop a multi-disciplinary program on neuronal death research that will complement faculty-wide efforts to understand and combat neurological disorders.