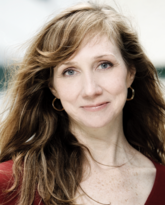 Dr. Fiona Costello is a Professor, affiliated with the Departments of Clinical Neurosciences and Surgery (Ophthalmology), University of Calgary and a Clinician Scientist with the Hotchkiss Brain Institute (HBI). She completed her medical school (1995) and Neurology residency training (2000) at Memorial University of Newfoundland, and then embarked on a clinical fellowship in Neuro-Ophthalmology at the University of Iowa (2000 – 2002). Her fellowship training was supported by an E.A. Baker Scholarship she received from the Canadian National Institute for the Blind. Since 2007, she has run a clinical practice in Calgary as a neuro-ophthalmologist, serving the needs of patients with disorders involving the visual pathways and the central nervous system.

Dr. Costello’s area of research focuses on using the eye as a model for brain disorders including multiple sclerosis and tumors. In 2013, Dr. Costello was named Chair to the Roy and Joan Allen Investigatorship for Vision Research and is working to establish a translational vision research program at the HBI. In 2017, Dr. Costello was named President of the Canadian Neurological Society, having served previously as Vice President from 2015-2017. Dr. Costello is co-affiliated with the Department of Surgery, she was Director of the Office of Surgical Research from 2013-2017. In 2017, she was honored for her “Outstanding Contribution in Leadership Award” Department of Surgery, University of Calgary. Dr. Costello was also awarded the “Senior Achievement Award” with the American Academy of Ophthalmology in November 2017. She has published nearly 120 peer reviewed papers, 21 book chapters and has been invited to give over 200 national and international presentations at numerous academic venues. Together with her colleagues, she has received more than eight million dollars in research funding.