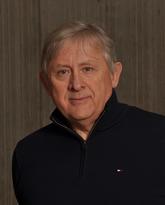 How can we describe Dr. Lemay?  One of his colleagues said the following about him “he is a dynamic, full of energy, funny, overall passionate human being.  He is somewhat unconventional in his teaching methods but efficient in his way of sharing his knowledge and dialoguing when he is teaching.”

Dr. Lemay arrived in Calgary in 1997, within the Developmental Pediatric Section at the Alberta Children’s Hospital (ACH).  Previously, he was part of the medical staff at McGill University (Montreal Children’s Hospital).  Since then he has filled numerous medical education positions, including:  Pediatric Postgraduate Director, Director of Admissions and Student Affairs and Financial Aid at the University of Calgary, Cumming School of Medicine (where he introduced and implemented the Multiple Mini Interview Admission Process), as well as numerous innovative initiatives in students’ support, Course 6 teacher, Ombudsman and Senior Advisor (evaluation process) for the Royal College of Physicians and Surgeons of Canada.

In 2010, he worked as part of the medical team at the Winter Olympics in Vancouver.  He has been president of the Calgary Keikos Swimming Club for 10 years and a medical volunteer for provincial and national canoe-kayaking events.  In addition, he is involved in numerous charity organizations such as Alberta Children’s Hospital Foundation.

Dr. Lemay summarizes his teaching philosophy with these 3 following quotes: