She Also Served: Jewish Canadian Servicewomen in the Second World War, May 1 - 31

The artworks featured in She Also Served: Jewish Canadian Servicewomen in the Second World War reveal the little-known stories of nine of the more than 250 Jewish women who enlisted in the Canadian Military during the Second World War. These servicewomen proudly served their country despite Canada’s “none is too many” Jewish immigration policy that was in place at the time.

She Also Served highlights a wide range of artistry including collaged archival photographs, oil painting, digital prints, and paper cutting. The nine artists who provided artworks for this exhibition are all women including Bev Tosh, an internationally exhibited artist and daughter of a war bride, Anne Petrie, a former CBC broadcaster-turned-artist and Lily Rosenberg, the daughter of Bulgarian Jewish survivors of the Second World War.

The artworks explore the servicewomen’s experiences, such as Cecilia Feingold’s work in army intelligence, and span the Canadian Navy, Army and Air Force.

The Memories That Makes Us, 2021, Digital Collage - Jules Schacter

"I am so grateful to have been given the opportunity to be a part of this exhibition,” says current BFA/BEd student Jules Schacter, whose digital collage The Memories That Makes Us (2021) features her great aunt Fiengold’s image. “Hearing about the stories of these strong, powerful Canadian Jewish women has been truly inspiring. Creating art and seeing others work about these women has helped me in embracing my own Jewish identity, especially in a time of increased antisemitism.”

The exhibition is curated by Dr. Jennifer Eiserman, associate professor, Department of Art and Art History, and Saundra Lipton, librarian emerita, University of Calgary, and was made possible through funding from the University of Calgary and support from The Military Museums. The exhibition is a part of She Also Serves — a larger research project profiling Jewish-Canadian servicewomen’s stories.

The exhibition takes place until May 31 at The Military Museum. A digital version of the exhibition can be viewed on the She Also Serves website. 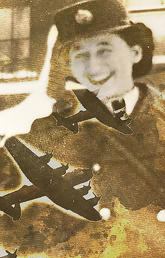