Innovation in sustainable food cultivation can change the world

Shelley Boettcher, for the Office of Advancement

Dr. Tatenda Mambo, PhD, a native of Zimbabwe, is a postdoctoral scholar in the university’s Sustainability Studies program in the School of Architecture, Planning and Landscape (SAPL). His work emphasizes the importance of how our agricultural practices have implications for our health, our environment, and our future.

The Sustainability Studies program is founded on a transdisciplinary approach that seeks to equip students with the problem-solving and leadership skills needed to address society’s complex sustainability challenges. A key focus of the program is to engage students in experiential learning and applied research projects with real-world implications, in collaboration with community partners and stakeholders.

As part of this sustainability studies initiative, Mambo is managing the Simon Farm project. The farm, on a 21-acre plot of land south of Calgary owned by John Simon, is in a five-year partnership with the university.

The idea for the farm project began when John’s daughter Anita Simon was talking with her friend Dr. Irene Herremans, PhD, a professor in the Haskayne School of Business and the School of Public Policy, and a leader in the Sustainable Energy Development (SEDV) program.

Now 94, John moved to Canada as a refugee after the Hungarian Revolution in 1956. He became a doctor and in the early 1970s, he bought the acreage near High River. For years it was his sanctuary of sorts, a place where he could hunt, fish and garden. A few years ago, he and his family decided it was time for someone else to benefit from the land — they envisioned their farm becoming a place for others to learn, connect and discover. Anita and Herremans were the first to come up with the idea of a partnership with the university.

“I immediately thought of possibilities for student projects in experiential learning,” says Herremans. “I could see possibilities for analyzing the feasibility of hydroponics, solar or geothermal greenhouses, and other possible energy-saving, environmentally respectful technologies on the farm — it seemed like an excellent fit.”

The Simons agreed. “This is a way for my father to give back,” Anita says. “He’s a real humanitarian and a strong supporter of sustainable architecture and agriculture, so this just made sense.”

Tatenda Mambo manages the Simon Farm project. The 21-acre plot of land is located south of Calgary near High River, and is on a five-year loan to the university by John Simon.

This is the basis for what is now the Simon Farm Project, managed by Mambo and Craig Gerlach, a professor in SAPL and the academic lead for the Sustainability Studies program, although the project is still very much a collaborative effort with the Simons and the SEDV program.

The overall goal of this project is to create an agroecological system where various forms of production are integrated, so that the different production activities feed into each other and function as a holistic ecological system. Fundamental tenants to the approaches used at the farm include biodiversity, nutrient cycling, closed loops, and environmental stewardship.

“I’m especially interested in looking at food systems, and how we can more sustainably produce food,” says Mambo, who completed his PhD in geography at UCalgary in 2016, with a focus on food insecurity in Malawi slums.

“Biodiversity is central to cultivating healthy soils, as such there’s a laundry list of vegetables we’re growing,” including lentils, zucchini, kale, garlic, beets, tomatoes, mushrooms, cucumbers, a variety of potatoes and even hops for Alberta breweries. He and the project stakeholders want to regenerate rather than degrade fertility within the soil as they farm.

It’s about agricultural practices that give back to the land, not just take from it.

Gerlach says, “Genetically modified seeds are not used, and the goal is to eventually abandon hybrid sees purchased from outside sources altogether. At some point soon, we hope to begin a seed saving program based on drought-resistant heirlooms that have been successfully cultivated by Indigenous farmers in arid areas similar to Alberta for thousands of years.”

The COVID-19 pandemic and recent budget cuts have thrown a wrench into plans for the coming year. The summer field school was not able to run in summer 2020, because students were unable to volunteer or study on the farm due to social distancing concerns. Driving from Calgary to High River a few times a week, Mambo did much the work himself with help from the Simon family, SEDV partners, and friends.

Though unexpected, of course, a significant positive upshot of the pandemic is that it has served to highlight the importance of cultivating and managing local food systems. “Once our trade routes get disrupted, our food supplies are also disrupted,” says Mambo.

One of the most gratifying aspects of the program for everyone involved has been its philanthropic reach in the community. This year, as with the previous year, produce was donated to the High River Food Bank. “It has been a blessing to have reliable, quality vegetables donated week after week,” says Chad Cole, the food bank’s manager. “We are only able to meet our community’s needs because of the generosity of people like Tatenda, and the team at the University of Calgary.”

While there’s currently a small greenhouse on the farm, Mambo hopes the university will one day be able to build a larger greenhouse — one that relies on solar thermal technology for heat in winter. For now, however, the plans are to continue research, one honorable harvest at a time.

“When we talk about food insecurity — particularly in reference to emergency food assistance —we often place emphasis on access to food, and much less on nutritious food,” he says. “My goal is to keep growing this project. We can do so much more.”

This project is one of three agroecological projects managed by the Sustainability Studies program at UCalgary, including a containerized food production hydroponic experiment at Kluane Lake Research Station in Yukon Territory, and a water scarcity project in Southern Alberta with regional farmers and ranchers. 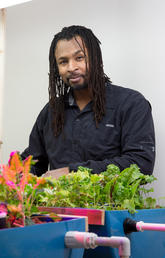 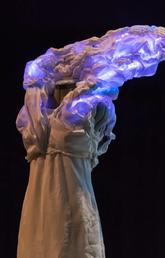 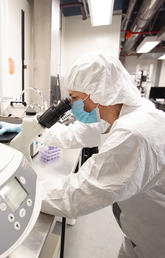 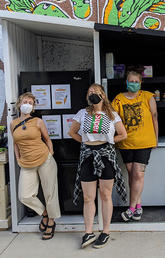 Take what you need, leave what you can: The story of a Calgary community fridge 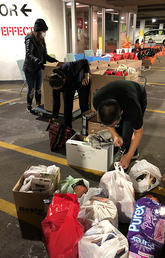 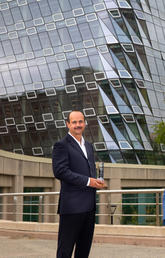