Dear friends and supporters of the E. Catherine Barclay Scholarship,

In lieu of our usual holiday newsletter, we have dedicated this opportunity to pay tribute to our esteemed friend, Dr. Gerald Hankins. On November 10, 2020 we said “adieu” to Gerald, whose journey lasted a marvelous 97 years. Together with a group of friends and colleagues, Gerald was devoted to creating the E. Catherine Barclay Scholarship. He shared the inspiration of the award with nearly every one of its recipients. Today, with greatest respect and gratitude, we are sharing some stories and memories of Gerald.

In the years since Gerald Hankins was a student at Western Canada High, the teaching of French has evolved tremendously. From being a subject taught essentially at the high school level, it is now offered in numerous guises ranging from total immersion through to the more traditional offering of French as a second language. Much of the early groundwork in that evolution can be traced back to the pioneering work of E. Catherine Barclay and the enthusiasm she inspired in colleagues and students such as Gerald Hankins.

Gerald never minimized his great fortune to have been in Catherine’s French 30 class in the late 1930s; “fortunate” in that a somewhat reluctant approval had been granted by the Department of Education, allowing Catherine to dedicate time to the development of aural/oral skills. This was a “eureka” moment for Gerald. New worlds could open up with even a basic knowledge of a second language. And whenever the going became rough, he could always respond to Catherine’s warcry: “En avant! A cœur vaillant rien n’est impossible.” Gerald would soon have the opportunity to recall this bit of sound philosophy when, in June of this grade 11 year, he was awarded a summer bursary to study French in a small town in Québec (Trois Pistoles). Free time enabled Gerald to explore by bicycle the rural areas of that part of Québec and to chat with some of the residents. And indeed, he realized that with even limited fluency in French, one’s eyes and heart could be opened to how “others” viewed the world.

In the late 1950s, with his military service and medical school behind him, Gerald became involved in another of Catherine’s projects: Cours de débutants--a variant of what is known now as “French Immersion.” The program was offered in the last two weeks of August and, once again, Gerald was involved. He and his family hosted one of the instructors, Guy Lecomte, who had just completed a six-week teaching session in the French program at the Banff School of Fine Arts. Typical of Gerald’s generous spirit, he made certain that Guy and one of his colleagues had the opportunity to explore the rural areas around Calgary and to be introduced to other Canadians. That was the summer when I first met Gerald, for I had offered to host Guy Lecomte’s assistant, a young French university student who had been the recipient of a bursary from the Banff School. This was the beginning of the Échanges Culturels France-Canada, a joint venture involving the Banff School of Fine Arts, The Alliance Française and the dedicated efforts of numerous people in Calgary. It goes without saying that Catherine Barclay and Gerald played an important role in this project.

It was not long, however, before Gerald gave voice to Catherine’s warcry, and a new program to honour his mentor’s spirit came into being. In this endeavour, Gerald was assisted by his lifelong friend, Bob Jones, in addition to several of Catherine’s former colleagues. Guy Lecomte was brought into the picture--and ideal contact in France, for Guy was now in charge of French-Canadian Studies at the university in Dijon. Thanks to the dedication of Gerald and Bob, the new group was ultimately incorporated into the Friends of E. Catherine Barclay Society. Brainstorming sessions results in lists of possible contributors being drawn up; contacts were made, and donations started to trickle in. In time, with the involvement of the French Department at the University of Calgary and the university in Dijon, an annual scholarship program was established.

As the value of the scholarship funds increased, and the founding members of the committee struck by Gerald and Bob aged, it was deemed wise to transfer the entire administration of the program to the Awards Department at the U of C. That fund is now self-sustaining thanks to the generosity of many Albertans and to the commitment of several recipients of the E. Catherine Barclay Scholarship. Although these award alumni never met Catherine Barclay, they have been witnesses to the enthusiasm and dedication she inspired in Gerald. I know from talks with Gerald how gratified he was that Catherine’s philosophy, which marked his life, was being perpetuated through the efforts of these young people.

Gerald’s death at ninety-seven this past October marked eighty years since the work of E. Catherine Barclay entered his consciousness. I feel certain it was reflected in every aspect of this long life...through active service during WWII, during his medical career, his humanitarian work in Nepal, and in his dealings with so many people throughout his life. You too, Gerald, have been an inspiration to so many people with whom we share this world; you have unfailingly modeled respect, concern and compassion for them. For your humanity, Gerald, un grand merci du fond du cœur.

Gerald Hankins on his Induction into the Alberta Order of Excellence

Although I only met Gerald once, he was in my thoughts during my time in France and since my return. At the reception before I left for France, one moment in particular resonated with me: Gerald told me that although his travels had taken him elsewhere, he had never spent time in France. I will never forget how awestruck, moved and humbled I felt in that moment.  It almost seemed ironic–how could someone ceaselessly support an initiative that they hadn’'t experienced first-hand? However, upon re-reading his article My Most Memorable Teacher and reflecting, I no longer saw it as ironic; instead, I realized the depth of his admiration for his teacher, Catherine Barclay, as well as his generosity and selflessness. His efforts to cherish her legacy and champion her mission by supporting something larger than himself remain an inspiration.

Although I don't remember the specifics of our conversation after that, I do remember that Gerald listened to me intently. I also remember feeling marked by his care and thoughtfulness. It would have been wonderful to share another conversation with him.

One of my favorite memories of Gerald was at my E. Catherine Barclay send-off ceremony. I was nervous about leaving for France and for the whole experience in general. I shared a conversation with Gerald for the majority of the evening, and I remember being inspired by his wonderful sense of humor, his interesting stories and his obvious passion for learning from the world abroad. After talking with him, I felt more at ease, less nervous and more excited for the adventure I was about to partake in. I feel so honoured that I had the opportunity to meet him, and my life has been forever changed for the better because of the opportunity enabled by the E. Catherine Barclay Scholarship that he helped put into place. I will forever be grateful to Gerald for that.

Paola Velasquez
2016 Recipient - Université de Bourgogne (Dijon)
As I was getting ready to study abroad in France, I met Gerald at my E. Catherine Scholarship send-off ceremony. I remember his detailed stories about Catherine, his sweet sense of humor and his encouraging words as I shared both my excitement and worries about travelling alone. I remember feeling inspired by his relationship with Catherine and the generous work he had done for the scholarship. His kindness, thoughtfulness and caring attitude will always stay with me. I feel honoured and grateful to have met him.

As a founder of the Award, Gerald blessed our community with his passion for learning. He was always kind, encouraging, and interested to hear about each award recipient and their experiences. It is through his work and the work of his fellow founders that a new community was created around a shared experience. I have no doubt that my time in France changed who I am as a person, how I understand and engage in the world, and for that I am forever grateful.

When I think of Gerald, I remember his smile, I remember his genuine interest in getting to know us, and I remember his love for Cathie. I remember the deep friendship Gerald had with Bob Jones and the other co-founders of the scholarship, and it was truly inspiring to see. You know in the end, Gerald and the other co-founders were Cathie to me. And that, I think, is the mark of their success. They sought to continue her legacy, and they truly did. The French language and the love of travelling and discovering other cultures will always have a place in my life, and for that I am grateful.

It was a wonderful privilege to know Gerald Hankins, Co-Founder of the E. Catherine Barclay Scholarship. From the day I met him, Gerald joyfully recounted stories of Catherine Barclay. His humble generosity, kindness, and desire to share the ideals that shaped the award also left their imprint on its alumni. Gerald always enjoyed meeting the scholarship alumni and hearing their stories. Future recipients will continue to embark on this unique journey thanks to the vision of the students, friends, and colleagues of E. Catherine Barclay. Gerald Hankins was a champion among them, and an inspiration. We will miss and remember him.

Humble. Gentle. Kind. Generous. These are the qualities that spring to mind when I think of Gerald, and these qualities made him an extraordinary listener. Gerald had a way of making people feel that what they had to say was fascinating and important--that they truly mattered. His graciousness and charming sense of humour would put everyone at ease at scholarship meetings and receptions. Gerald always seemed impressed by the accomplishments and ambitions of each successive scholarship recipient, and I find this remarkable given all of his own life’s accomplishments. The fact that he took such a genuine interest in young people is a testament to his deep humility. Over the years, as a small group of award alumni took over fundraising for and promoting the scholarship, Gerald remained for us a steadfast source of not only encouragement, but also of inspiration. During the years when we worked to raise enough money for an annual award, we were propelled forward by the vision of how wonderful it would be to give Gerald the news that we had finally been successful. 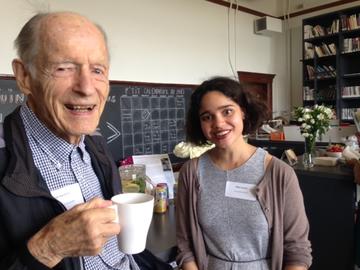 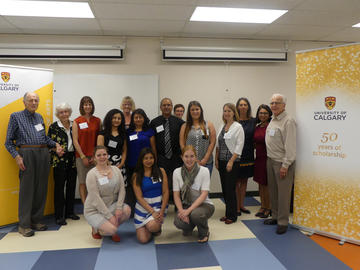 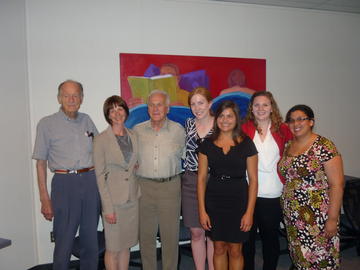 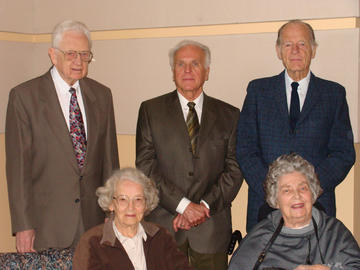 We’re thankful to Gerald Hankins for his years of guidance and encouragement and would like to share with this group a series of five short videos that Gerald graciously filmed with us in October 2014. The clips capture some of the history of the E. Catherine Barclay award through Gerald’s eyes. The video playlist can be accessed on YouTube.

About the E. Catherine Barclay Scholarship

Offered annually to an undergraduate student registered in any faculty at the University of Calgary wishing to pursue studies in France through an official exchange program, for two semesters. Award holders must select courses in which the language of instruction is French.

Apply to the French Centre by March 30. 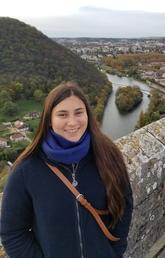 From Besançon to Madrid 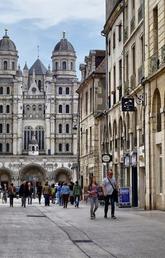 Greetings from Dijon, the land of mustard and wine 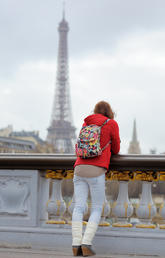 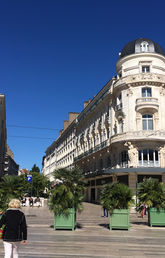 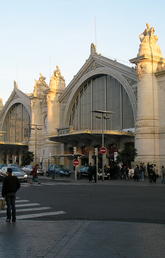 Announcing the next recipient of the E. Catherine Barclay Scholarship