Former 'Lost Boys of the Sudan' beat the odds

UCalgary Across Alberta: From South Sudan to southern Alberta, new social work grads are eager to put their education to work

Kloie Picot, for the Faculty of Social Work

John Manyok and Samuel Mathon were taken from their villages in South Sudan when they were younger than 10. The two were part of the “Lost Boy” diaspora, 20,000 boys and young men who marched more than 1,000 miles to the border of Ethiopia. Along the way, many of the boys died, including Manyok’s childhood best friend, who grew up with him in the cattle camp in his village of Ciir.

“The feeling of losing a loved one was unknown to me until Feb. 1, 1988,” reflects John. “That was the day I lost my friend Matiop Akoi Garang. I watched him slowly giving away his last breath while I held him in my arms, and there was nothing I or anybody could do to bring him back to life.” 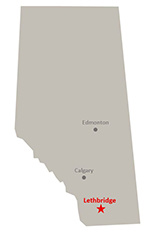 It’s estimated that over half the Lost Boys died during their exodus, succumbing to starvation, dehydration, disease, wild animal attacks and explosives set by the Sudanese government. The boys had to bury their own friends, although they were often too small to really dig the hard ground. Some went on to the sprawling refugee camps in Kenya, while others were trained to become child soldiers in the South Sudan fight for independence.

Manyok and Mathon made it to Ethiopia where they were trained, as Mathon says, “to fight, and fight, and fight, and fight.” They spent years in the bush, a moving skirmish in the seemingly endless, bloody civil war. Eventually, the two managed to slip away from the army, and each found his way to the Kakuma refugee camp in Kenya.

Through the United Nations, NGOs and private sponsorship, some of the Lost Boys were brought to Canada. Manyok found himself in Toronto. Mathon’s uncle, James Akot Riiny, who had previously made it to Calgary, worked tirelessly on his behalf and was able to work with the Calgary Catholic Immigration Society to bring Mathon to Calgary.

“He worked so hard as an advocate for all the Sudanese people who were in the refugee camps,” says Mathon. “He made so many presentations to raise awareness, and he was really responsible for bringing many people here. I think he should be an inspiration for many people working in their communities, that they can make a difference.”

And while they were thrilled to be here, the two faced an uphill climb; with no English language skills or education, they had limited prospects.

Both made their way to Brooks, Alta., where they met for the first time on the floor of a meat packing plant. Bonded by their common experience, they’ve been great friends ever since.

In time, the two men moved away and found new jobs. Manyok went to Fort McMurray, and Mathon relocated to Lethbridge, where he worked for a poultry packing plant in the evenings, taking English courses at Lethbridge College in the mornings.

Mathon was so impressed with his experience at the college that he convinced Manyok to join him. Even in their late 20s, the two men felt that education was key to a better life in Canada. They enrolled in a unique ESL program that provides students the option to enter an upgrading program where they can earn a Grade 12 equivalency.

After completing those steps, Manyok and Mathon were accepted into the General Studies program and eventually graduated with a diploma in sociology, psychology and social work.

After years of combining work, school and family life, Mathon and Manyok were unsure whether they wanted to continue with their education, or simply to focus on work. One of their professors, UCalgary Faculty of Social Work alumnus Keith Dudley, BSW'90, MSW’95, convinced the two to go on to university and earn their social work degrees, which they did through UCalgary’s Southern Alberta Region campus in Lethbridge.

“I think he (Dudley) saw something in me, that he thought I would be a good social worker,” says Manyok. “Maybe it was the experiences I went through. He said, ‘You shouldn’t be working with machines, you should be working with human beings.’ So in 2016, I began working with people with disabilities.”

This June, after two more years of hard work, the men mark another important milestone on their amazing journey, as they received their degrees in social work from UCalgary.

“I’m so happy,” says Mathon. “First of all, I can’t believe I live in a country like this. Secondly, I can’t believe I’m graduating with a university degree. Even right now, I still can't believe that I did it, you know?”

“Both Sam and I would like to thank our peers, professors and family members for their support during this long journey,” says Manyok. “Looking back I have to say my main motivation all along wasn’t to make more money. My motivation was to learn English and to enhance my communication skills in my new home.”