University of Calgary International hosted Germany Day on Oct. 6. The annual celebration of German culture and German-Canadian relations had been put on hold since the start of the pandemic, but saw over 160 students, staff, faculty and community members come out to celebrate and listen to WestJet CEO Dr. Alexis von Hoensbroech.

Von Hoensbroech took the helm this year at a key period of transition for the airline industry. He spoke about the importance of air travel bringing together communities, cultures, and economies; the challenges faced during the pandemic; and goals for a sustainable future.

Originally from Cologne, Germany, von Hoensbroech holds a doctorate in physics from the Max Planck Institute for Radio Astronomy in Bonn. Before joining WestJet in 2022, he was CEO and CFO of Austrian Airlines, and previously CCO of Lufthansa Cargo AG.

The aviation industry, worth billions, saw demand drop by 90 per cent during the pandemic, affecting millions working in the industry. Von Hoensbroech says demand is back to pre-pandemic levels for leisure travel, and travel to visit friends and family, but business travel is at approximately 60 to 70 per cent of its pre-pandemic levels. This is likely due to businesses seeing significant cost savings with reduced travel and an increase in virtual conferencing.

A major focus for the industry is how to fly sustainably. The aviation industry accounts for two per cent of global greenhouse gas emissions. Von Hoensbroech says there are three ways to become more sustainable:

Procedures — including using data more effectively to create optimal flight profiles. This includes assessing temperature, wind speeds, flight paths, the number of engines needed to be running while taxiing on the runway, to use a continuous descent when landing or descend in steps — as just a few examples.

Sustainable jet fuel — to date, the internal combustion engine is the most efficient way to fly an airplane, at least for the foreseeable future. Reviewing the alternatives to fossil fuel, von Hoensbroech contends that hydrogen fuel for aviation isn’t looking promising for the near term, electric power through batteries is too heavy, and biofuels risk cutting into food supply. The option he views as realistic is to produce synthetic fuel sustainably.

The industry goal is to become emission neutral by 2050, and the Alberta government is showing its support, announcing last week that it is committed to do its best to develop large-scale production facilities for sustainable aviation fuel in Alberta.

WestJet’s quick rise is well known in Calgary from three planes in 1994 to over 100 today. The average age of its airplanes is nine years, contributing to its sustainability, says von Hoensbroech. The company continues to invest in newer, larger aircraft that are more technologically advanced and more sustainable. WestJet has already seen its emissions per seat cut in half since 2000.

“Aviation is essential to the rapid movement of people and goods worldwide and is a significant contributor to global human development,” says Dr. Alex de Barros, professor, Schulich School of Engineering.

“The aviation industry is also one of the so-called ‘tough to decarbonize’ industries as it requires very high energy density, which is currently only possible with the use of internal combustion engines. Reducing emissions in aviation requires the optimal use of resources, which is and has always been the goal of aviation leaders.” 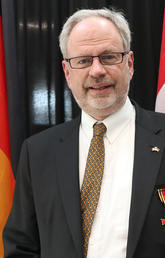 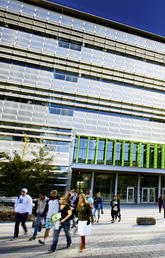 100 years later, Bauhaus leaves its impact on UCalgary and around the globe 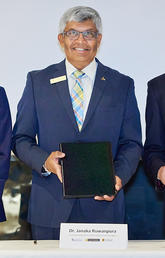 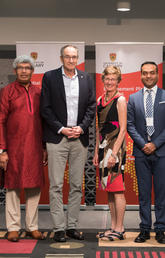 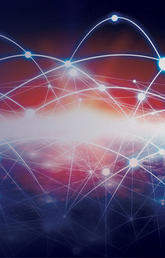 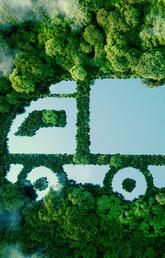 It’s time for corporations to invest in electric trucks