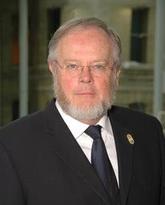 Dr. Dean Sandham is one of the pioneers of critical care in Canada. A farm boy from southern Alberta, Dr. Sandham attended medical school at the University of Alberta. After a short time at the Montreal General as an intern, Dr. Sandham returned to Alberta as a family physician in Red Deer. He then completed internal medicine and pulmonary medicine fellowships at the University of Calgary. Dr. Sandham was responsible for starting the multidisciplinary ICU at the Calgary General Hospital. In 1986, he moved as the medical director of the Foothills Hospital ICU. Dr. Sandham was foundational in the development of critical care medicine at the University of Calgary starting the critical care residency training program, and establishing first a free standing division of Critical Care Medicine, followed by Critical Care Medicine becoming a free-standing clinical and then academic department; Dr. Sandham was the inaugural head of both the division and the department. Dr. Sandham was influential in the funding for the Snyder Chair in Critical Care Research. Dr. Sandham had an important national influence in critical care including helping to start the Canadian Critical Care Society, The Canadian Critical Care Trials Group, and the Canadian Intensive Care Foundation. Dr. Sandham served as the Dean of the University Of Manitoba Faculty Of Medicine before retiring, and returning home to Alberta. Dr. Sandham’s legacy of excellence in clinical care coupled with the importance of research and patient safety continues as a philosophy within the department. The Dean Sandham Clinical Teaching Award is named in his honour, in part recognizes his influence on the training of high quality clinicians, and is awarded annually to a clinical teacher within the department (as selected by trainees). Dr. Sandham continues to reside in Alberta, and is an avid flier, outdoorsman, and music maker with his unique bedpan banjo.