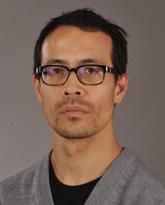 Dr. Bryan Yipp is a physician-scientist and assistant professor in the department of critical care medicine at The University of Calgary. His research interests include imaging host-pathogen responses and the in vivo immune system. Bryan joined the Leaders in Medicine program at The University of Calgary and completed a combined graduate immunology and medical degree (2000-2005). He pursued Internal Medicine at The University of British Columbia in Vancouver (2005- 2008) followed by Critical Care Medicine in Calgary (2008-2010). Following his clinical training, Bryan was accepted into a physicianscientist training program at The Rockefeller University, New York, where he studied under Dr. Ralph Steinman (Nobel Laureate 2011). Currently, Dr. Yipp is investigating acute immune responses in the lung using advanced resonant scanning confocal and multiphoton intravital microscopy. He has received a Canada Foundation for Innovation award and holds a Canada Research Chair (tier II) in pulmonary immunology, inflammation and host defense. His laboratory is supported by operating funds from the CIHR.